A Little Re-Introduction & an Update 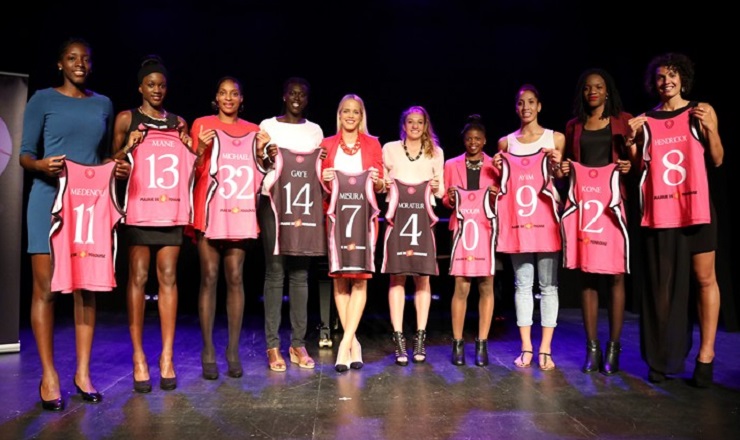 I know it’s been a while since I’ve written a blog, but I recently agreed to contribute to Ray Bala’s “The Pro-File” series on his site, so you’ll be getting plenty of new content. The posts will be available both HERE (MA.com) and www.canballreport.com. Some of the information in this first edition might be common knowledge to those who already follow MA.com, but you never know, maybe you’ll learn something new. I also talk about my recent experiences with Team Canada at the World Championships and the start of my season in Toulouse, France thus far. Check it out…

For those of you who don’t know me, let me introduce myself. My name is Miranda Ayim. I’m a 26-year-old from London, Ontario, Canada. I grew up playing every kind of sport – just an active little kid from a family that enjoyed an active lifestyle. I played both volleyball and basketball in high school, but eventually focused solely on basketball for my last two years of high school. In 2006, I received a basketball scholarship to Pepperdine University in Malibu, California. I graduated with a degree in Public Relations/Psychology in 2010. Since then, I have been playing professionally overseas, spending 3 years in Turkey and last year in France. I’ve returned to the same team this year for a second season in Toulouse, France.

Now, that’s one side of my basketball career. The other side is my involvement with the Canadian national team. I started playing for Canada the summer going into high school. I played on all the younger teams (MDP, JDP, Under 19, Under 21, Development) and finally found a spot on the roster of the senior women’s team in 2010. It has been an amazing ride that has taken me to countries all over the world from Japan and China to Russia and Czech Republic to Brazil and Columbia. Most notably, it took me to London, England where our team competed in the 2012 Olympics. Rio de Janeiro 2016 is the next thing on our list, which will (*fingers crossed*) be realized next summer during the Olympic qualifiers, which are being hosted by Edmonton, Alberta. Most recently, Team Canada had an epic showing at the World Championships in Turkey this past September. We placed 5th in the World, making it our best result in over 20 years.

The World Championships ended on the 5th of October and the following morning I was on a flight to Toulouse. My professional team had already been practicing and playing some friendly games so there was no time to go home to Canada. The grind! A lot of people don’t realize that many professional players, especially those who play for their national teams or women who play in the WNBA (because the season is in the summer), don’t have an off-season. We play all through the summer and all through the fall/winter.

Changing over from Worlds to the French league took a bit of readjusting, both mentally and physically. There’s the obvious difference of personnel (teammates, coaches and support staff), the living conditions (settling into a new apartment), and the distinct style of play that changes from country to country and league to league. It’s like transferring from the Los Angeles headquarters of your company to the Dallas branch. It’s essentially the same line of work, but many intangibles vary.

So, here I am, transferred back to my Toulouse branch. The city is quite nice. With a population of about 500,000, it’s big enough to find things to do yet small enough to avoid the feel of a metropolis. Our team’s colours are pink and black, which I simultaneously love and hate. Black is a fantastic color and goes with everything. Pink is nice for a splash of personality; however, I loathe the all the “girlish” imagery that is tied to the colour, especially overseas where women’s sports are sometimes marketed using the “sexy” angle. We’re not trying to look good to impress, we’re just trying to play some ball!

Anyways, our team is quite young this year. I’m one of the oldest players at 26 years of age. To give you a picture of a typical team, usually a professional women’s team would have at least a couple women in their 30s, the majority in their mid- to late-20s and then a few in their early 20s, with possibly an 18 or 19 year old mixed in. That being said, we are extremely athletic and fast. This is probably the quickest team I’ve ever been on, which fits with my style of play completely. Last year, after a rough start to the season, we finished in the top 8. We’re hoping to build on that this season.

A common question I receive about playing overseas is “Where are your teammates from?” Most of the ladies on the team are from the greater Paris area (which is towards the north of France) and a few are from other smaller cities around the country. Toulouse is located in southern France, less than a 3-hour drive from Barcelona, Spain. We have some great French players who are up and coming players within the French national team system. It’s helpful to have good domestic players on the team, plus an addition of foreign players. Each team is allowed four foreigners (2 North Americans and 2 Europeans). Besides myself, we have a New Yorker, a Croatian and a Belgian player. Our American, Nicole Michael, played at Syracuse University and has played in quite a few different countries overseas. Our Belgian, Sofie Hendrikx is the captain of her national team and decided to play professionally outside of Belgium for the first time this year. Finally, our Croatian, Antonija Misura, is a fellow Olympian. At the London 2012 Games, she was dubbed “the most beautiful basketball player” which garnered a lot of media interest and has inevitably led to a lot of amusing run-ins with adoring fans. Well, at least amusing for her teammates who are looking on, hehe.

Well, I think that suffices for a pretty good introduction of myself and where I’m at for right now. I’ll be checking in with you a couple times a month both here and on “The Pro-File”. Feel free to leave comments or questions! Much love.

Ray Bala is a Canadian writer who has been employing various social media outlets to promote Canadian basketball for many years. He was doing it before people noticed that – wow – there were good basketball players coming out of Canada. Mad props. Check out his website, The Can Ball Report, or follow him on Twitter: @CanBallRay.